Highlights: A singing male Serin, Cumbria’s fifth, was a brief visitor to the observatory garden at South Walney (19th) and a Hoopoe was photographed in a garden at Penton (22nd). The Todd’s Canada Goose was seen again among the Barnacle Geese at Whitrigg (10th). 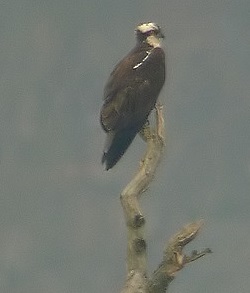 Bassenthwaite Lake: A new pair of Ospreys, a Scottish-ringed female and an unringed male, took up residence though eggs had not been laid by the month end. Several additional birds were also seen and other sightings included a Little Gull and 11 Arctic Terns (20th). 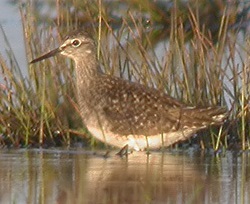 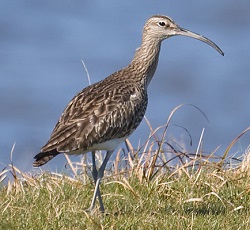 Inner Solway: Numbers of Whooper Swans and Pink-footed Geese declined as the month progressed while other wildfowl included a dark-bellied Brent Goose at both Whitrigg and Bowness-on-Solway, a pair of Garganey at North Plain (25th-30th) and a Long-tailed Duck (15th), a female Velvet Scoter (17th), up to 70 Common Scoters and 26 Scaup all at Bowness-on-Solway. An Osprey flew over Rockcliffe (7th) and a Marsh Harrier appeared at North Plain (29th). Two Little Egrets lingered. Waders included a Wood Sandpiper at North Plain (28th), a Ruff at Anthorn, Black-tailed Godwits (max. 120 at Campfield Marsh) and Whimbrel (max. 50). With a change in wind direction, skua passage finally got underway (15th) and by the month end totals had reached 63 Pomarine, 16 Arctic and an exceptional 57 Great. The supporting cast included Red-throated Divers (max. 30), a few Manx Shearwaters, Fulmars and Gannets, a Shag (16th), a total of 25 Little Gulls (max. six on 15th & 18th), Kittiwakes (max. 840), Arctic Terns (max. 80) and a Little Tern (16th) all past Bowness-on-Solway. White Wagtail passage brought a maximum 23 to Campfield Marsh.

Kent Estuary: At least 10 Little Egrets were present and up to 18 Whooper Swans were seen. Waders included six Whimbrel and an impressive 120 Black-tailed Godwits while up to 23 Arctic Terns were also noted. A few passage White Wagtails (max. nine) and Wheatears were noted and a flock of 11 Crossbills visited Foulshaw Moss.

Outer Solway: Seawatching produced three Arctic Skuas (max. two on 15th) and up to 28 Red-throated Divers past Braystones and a Great Skua (23rd), up to 120 Manx Shearwaters and 46 Arctic Terns past Workington. The adult Yellow-legged Gull was seen intermittently at Whitehaven (to 24th) as were two Black Guillemots. Workington continued to host 14 Purple Sandpipers though much more unusual was the female Black Redstart found there (21st). A Hooded Crow was at Nethertown and a singing Wood Warbler at Lilyhall Industrial Estate (29th) was unusual.

Waxwings continued to be seen to mid-month with peaks of 35 in Levens, 25 in Kendal, 10 in Stainton near Penrith, seven in Arnside, six in Penrith, two in Carlisle and a single at Halfpenny.

Other sites: Northbound Ospreys were noted at Bootle and Ghyll Head near Windermere. Little Egrets included four in the Lyth Valley. Three Arctic Terns turned up over the River Kent in Kendal (18th) with the same number at Windermere (23rd) while a Black-tailed Godwit visited Thacka Beck N.R. Penrith (18th).The Eskmeals Hooded Crow remained in residence while the Sizergh Castle Hawfinches peaked at just five, with eight also visiting a Grange-over-Sands garden. A flock of five Snow Buntings were on the summit of Cross Fell.