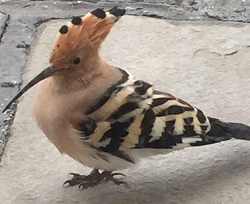 Highlights: A male Bluethroat was photographed near Rogersceuch Farm, Campfield Marsh (8th) and a Hoopoe graced garden in Dent (13th-14th). Two Common Cranes spent an evening in the Lyth Valley (18th) and were then seen circling over Foulshaw Moss next day. Of more doubtful origin, a White Stork flew over Sizergh (13th). The two Great Grey Shrikes lingered at Dalton Crags early in the month.

Bassenthwaite: The Ospreys returned on cue and eggs were duly laid well before the month end.

Hodbarrow: The two Slavonian Grebes lingered on the lagoon (to 19th). Wildfowl included three Gadwall and a Scaup while pick of the waders were eight Black-tailed Godwits and a Greenshank. Sandwich Terns (max. 250), Common Terns (from 21st) and Little Terns (from 23rd) all arrived on cue but showed no signs of settling to breed by the month end. Nearby, a juvenile Iceland Gull was found at Silecroft.

Esk/Irt/Mite complex: The Esk hosted a Little Egret, a Greenshank and a Green Sandpiper with a Hooded Crow and a Short-eared Owl nearby.

Outer Solway: A Black-throated Diver appeared off Nethertown along with a Shag and a Fulmar. An adult Yellow-legged Gull was seen at Whitehaven Marina (13th). Waders included 11 Whimbrel at Mawbray.

Other sites: Inland Scaup comprised singles near Linstock and at Wet Sleddale. Little Egrets included 12 in the Lyth Valley. A Marsh Harrier passed through Thack Beck N.R. Penrith followed by a Red Kite of which there was a good scattering around the county. Several Ospreys moved through Geltsdale with others noted at Carlisle airport, Caldbeck and Lambrigg. A Hooded Crow was seen at Sand Gate near Flookburgh. A Black Redstart visited a garden at Holme. Up to seven Hawfinches were seen at Witherslack with up to five at Sizergh Castle.