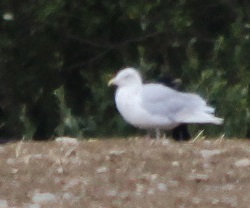 Highlights: The first-summer Glossy Ibis remained in residence on the River Bela just south of Milnthorpe (to 3rd) while a Great White Egret seen briefly at Longtown (3rd) was followed by another that visited several sites around the Kent Estuary (22nd-26th). A Sooty Shearwater was reported off Parton (11th) and a highly unseasonable adult Iceland Gull appeared at Mockerkin Tarn (22nd).

Bassenthwaite Lake: The Ospreys fledged one of their two young but the other had to be taken into care having failed to develop sufficiently to be capable of flight.

Hodbarrow: Waders included seven Black-tailed Godwits and a Greenshank. An adult Yellow-legged Gull was on the adjacent estuary (5th) while a Pomarine Skua passed nearby Silecroft (26th). 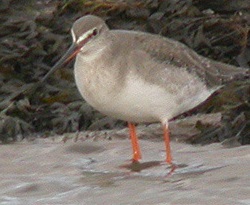 Inner Solway: At least eight Little Egrets roamed the area. A Quail called from a wheat field at Blackdyke near Silloth (13th). Seawatching at Bowness-on-Solway produced an immature Long-tailed Skua (11th) and two Great Skuas along with a handful of Manx Shearwaters and Gannets. Waders included up to two juvenile Curlew Sandpipers at Bowness Railings/Port Carlisle (from 22nd), the adult Spotted Redshank still at Port Carlisle along with small numbers of Ruff (max. three), Whimbrel (max. three) and Black-tailed Godwits (max. 10) and Greenshank (max. five at Rockcliffe). An adult Mediterranean Gull was at Silloth (20th).

Kent Estuary: At least four of the Foulshaw Moss Ospreys lingered for much of the month and there were several sightings of at least three wandering Marsh Harriers while a minimum of 31 Little Egrets were present. The first Pintail returned (14 on 31st). Waders included a juvenile Little Stint (27th), 13 Black-tailed Godwits, two Greenshank and a Ruff.

Other sites: A remarkable 250 Common Scoters appeared inland at Haweswater Reservoir (2nd) while a Sandwich Tern at Whinfell Tarn (12th) was another unusual inland record. Less unexpected were a single Common Scoter on Sunbiggin Tarn and an Arctic Tern at Talkin Tarn (29th). Six Green Sandpipers were seen together in the Rusland Valley (9th) and the River Esk at Longtown hosted 30 Black-tailed Godwits (31st).