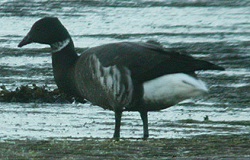 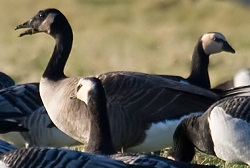 Highlights: The adult Black Brant continued to associate with dark-bellied Brent Geese at Roa Island and nearby Walney while a Todd’s Canada Goose was found with the Barnacle Geese on the Inner Solway, initially on Skinburness Marsh (20th) before relocating to Cardurnock (28th-29th). A Great White Egret turned up briefly in the far south of the county near Hale (4th). A Black Guillemot on Talkin Tarn (20th-22nd) was a truly exceptional inland record, probably the first in the county.

Furness: The Foulney/Rampside Brent Goose flock numbered at least 65 dark-bellied and 150 pale-bellied birds. A Great Northern Diver (20th) and a Water Pipit (15th & 20th) were seen at Rampside, along with at least 18 Rock Pipits.

Hodbarrow: Wildfowl included 25 Gadwall and four Scaup while a Black-tailed Godwit was the pick of the waders. Nearby Silecroft produced 160 Common Scoters, 38 Red-throated Divers and a Chiffchaff (4th) while Borwick Rails hosted a Greenshank and a first-winter Mediterranean Gull (31st).

Kent Estuary: At least 17 Little Egrets were present. Whooper Swans appeared regularly (max. eight) and a drake Common Scoter was seen (19th), The late Little Stint lingered at Arnside (to 1st) while 30 Twite were at Grange-over-Sands. 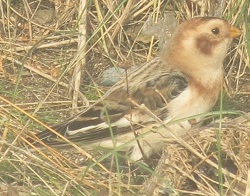 Outer Solway: A juvenile Iceland Gull made a brief appearance at Parton (6th) and both a Great Northern Diver (31st) and an adult male Long-tailed Duck (26th) were seen off Nethertown while Soddy Gap hosted an impressive 220 Goosanders. At least two Bitterns were seen occasionally at Siddick Pond. The Workington Purple Sandpiper flock held at least 50 birds, with ‘Stumpy’ the regular adult Mediterranean Gull also present. A flock of 25 Twite frequented the beach at Mawbray while a Snow Bunting appeared at Workington (11th).

Walney Bird Observatory. Again there were relatively slim pickings over the sea, the highlight being limited to 20 Shags and a total of three Little Gulls (one on 19th, two on 28th), along with small numbers of Red-throated Divers (max. 12 on 17th), Common Scoters (max. 40 on 26th) and Kittiwakes (max. 60 on 19th). Up to 33 Little Egrets were still present while an adult Mediterranean Gull was logged (14th). The Brent Goose flock held 156 pale-bellied and 60 dark-bellied birds while other wildfowl included three Scaup and a Long-tailed Duck amongst 30 Goldeneye and a Gadwall and five Shoveler amongst good numbers of Teal and Wigeon. Wader numbers included 8000 Knot and 20 Purple Sandpipers whilst 13 Greenshanks remained to overwinter. Passerines are few at this time of the year but included a flock of up to 55 Twite. 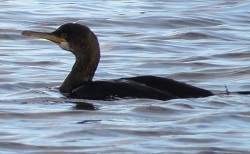 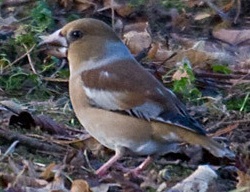 Other sites: A Great Northern Diver appeared inland on Coniston Water (25th) while a Shag on Talkin Tarn was another good inland sighting (25th-31st). Whooper Swans included 86 at Longtown, where a Scaup and a first-winter Little Gull (26th) were also present, and 65 at Kirkby Thore. Brambling included 300 at Talkin Tarn and 70 at nearby Brampton while at least one Hawfinch continued to frequent the Sizergh castle car park.