Highlights: The Great Grey Shrike remained in residence at Dalton Crags (to 6th).

Esk/Irt/Mite complex: The Esk hosted two Little Egrets and a single Greenshank, while up to five Greenshank were on the Mite.

Hodbarrow: A Slavonian Grebe was in the channel by the lighthouse (4th). Wildfowl included five Shoveler and 20 Gadwall while pick of the waders were seven Black-tailed Godwits. Nearby, a Black-throated Diver was seen off Silecroft (4th) and four Little Egrets were on Green Road Marsh.

Kent Estuary: A flock of 18 White-fronted Geese was reported flying up the estuary over Arnside viaduct (16th) and at least 25 Little Egrets were present. A Marsh Harrier lingered along with at least one ringtail Hen Harrier, several Peregrines and at least one Merlin. The Lyth Valley juvenile Glaucous Gull appeared at Sandside (31st). A wintering Chiffchaff was at Foulshaw Moss. Some 80 Twite frequented the saltmarsh around Grange-over-Sands.

Outer Solway: Whitehaven harbour hosted three Shags with one also seen at nearby Parton. At least one Bittern was at Siddick Pond while 35 Purple Sandpipers were at Workington and a Ruff was at Blencogo. Mediterranean Gulls consisted of at least two adults and a first-winter at Broughton Moor and an adult at Workington. A Black Redstart appeared at Whitehaven harbour (1st). 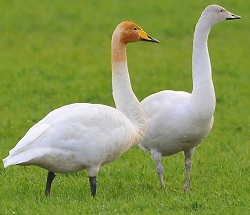 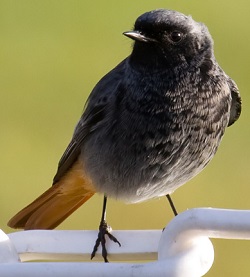 Other sites: A Great Northern Diver appeared inland on Windermere (28th). Little Egrets included three in the Lyth Valley where a juvenile Glaucous Gull was attracted to a sheep carcass (17th-30th). Whooper Swans included 57 at Walby. A flock of 10 Waxwings was reported at Levens (30th), the male Black Redstart remained at Carlisle airport all month, a Chiffchaff was at Low Mills, Dalston and a Hooded Crow was near Burneside. 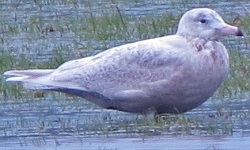