Furness: The Rampside/Foulney area held 49 dark-bellied Brent Geese, two Little Egrets, a Jack Snipe, a Short-eared Owl and up to 21 Rock Pipits with at least four Mediterranean Gulls, an adult, two second-winters and a first-winter, also present. Cavendish Dock hosted a Shag and a Greenshank. 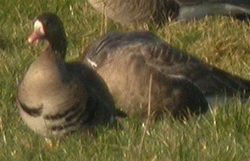 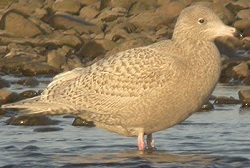 Inner Solway: Whooper Swans declined in numbers with no large flocks reported while Pink-footed Geese increased with up to 10000 in the area but just four Tundra Bean Geese were seen on Newton Marsh. Meanwhile European White-fronted Geese remained exceptionally numerous, peaking at 200 near Easton, a handful of Greenland White-fronts were present, the Ross’s Goose appeared occasionally anywhere between Rockcliffe Marsh and Grune Point and single dark-bellied Brent Geese were near Easton and on Skinburness Marsh. Two Slavonian Grebes drifted past Bowness-on-Solway (12th). At least one Little Egret was present. Waders included a Ruff at Anthorn and a Spotted Redshank at Campfield and Port Carlisle. The juvenile Glaucous Gull lingered around New Sandsfield (to 15th) and small numbers of Kittiwakes headed east at Bowness-on-Solway (max. 60 on 25th). 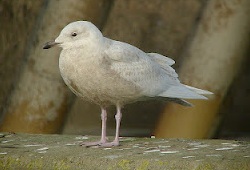 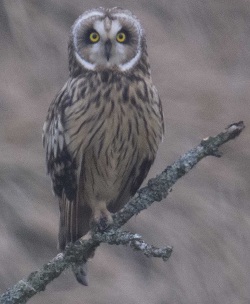 Outer Solway: The female Long-tailed Duck remained in residence at Soddy Gap and 13 European White-fronted Geese appeared there (8th-9th) along with a female Scaup, 137 Goosander, 162 Common Snipe and a Jack Snipe. At least two Bitterns remained at Siddick Pond, along with a Scaup and up to 170 Goosanders. Single Shags were at Whitehaven and Workington where a Black-throated Diver (23rd), up to 18 Red-throated Divers and 40 Purple Sandpipers were also to be found. A Black-throated Diver also appeared off Sellafield (24th). Mediterranean Gulls remained relatively scarce with three, two adults (including the usual one-legged bird) and a first-winter, at Workington and an adult at Flimby. White-winged gulls consisted of a juvenile Iceland seen between Whitehaven and Parton and a juvenile Glaucous between Maryport and Allonby. At least eight Short-eared Owls hunted Whinfell Forest near Great Broughton.

Walney Bird Observatory: Although a Great Northern Diver (8th) and up to eight Shags were seen and the first Gannet appeared (25th), it was generally quiet over the sea with just small numbers of Red-throated Divers (max. 24 on 19th), Kittiwakes, Razorbills and Guillemots logged. At least 11 Little Egrets were still around the island, including a colour-ringed bird and a Water Rail lingered (from 19th). A total of 1230 Pink-footed Geese flew through and grounded birds involved 15 White-fronted Geese (1st), 35 Barnacle Geese and 163 pale-bellied Brent Geese. The long-staying female Scaup and Long-tailed Duck were in residence all month and a redhead Goosander lingered (11th-16th). Waders included: 11 Greenshank, 10 Purple Sandpipers, two Woodcock and a Black-tailed Godwit. A ringtail Hen Harrier was seen (1st & 10th) and at least one Short-eared Owl was still in residence. High tides pushed 30 Rock Pipits and a single Water Pipit from the salt marshes (23rd) while the Twite flock held up to 100 birds. A Mistle Thrush (28th) and a trickle of Blackbirds, Song Thrushes, Grey Wagtails, Greenfinches and Chaffinches hinted that spring was not far away.

Other sites: A Bewick’s Swan remained at Longtown (to 21st) with 75 Whooper Swans while another 56 Whoopers were at Kirkby Thore. European White-fronted Geese consisted of 120 at Longtown, 57 near Flookburgh, eight at Hodbarrow, four near Kirkby Thore and two at Waberthwaite while Tundra Bean Geese comprised two at both Flookburgh and Longtown. The Long-tailed Duck lingered at Longtown Ponds (to 18th) where it was joined by a pair of Smew (from 6th). Another, or possibly the same, pair of Smew also appeared on both Talkin Tarn and Tindale Tarn on occasions while a redhead was seen on Bassenthwaite Lake (15th). Four Scaup were also inland at Bassenthwaite. At least three Short-eared Owls hunted the Flookburgh Marshes. A Ruff and an adult Mediterranean Gull were seen on Walby floods near Crosby-on-Eden and a second-winter Mediterranean Gull appeared at Ravenstown, Flookburgh. Hawfinches included seven at Sizergh Castle and six at both Hutton Roof and Allithwaite.