Highlights: The Todd’s Canada Goose, last seen in October 2012, reappeared among the Barnacle Geese at Whitrigg and Newton Marsh (26th-28th) while the drake Green-winged Teal lingered at Hodbarrow (to 18th). 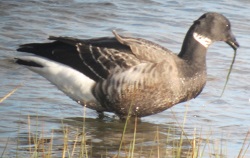 Furness: The juvenile Great Northern Diver on Ramsden Dock was joined by a second bird (6th-12th) while a Slavonian Grebe appeared off Foulney Island (27th) where 5300 Eider were also counted. Up to 166 pale-bellied and 55 dark-bellied Brent Geese in the Rampside area were occasionally joined by the juvenile/first-winter Black Brant (or hybrid); this bird commuted between here and South Walney. 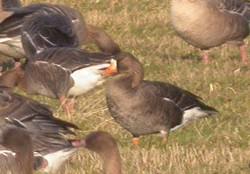 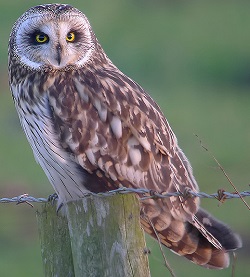 Walney Bird Observatory. Offshore highlights were led by single Little Auk (14th), Black Guillemot (23rd) and Red-necked Grebe (25th) along with up to four Shags and good numbers of Red-throated Divers (max. 25 on 14th), Kittiwakes (max. 80 on 14th) and Red-breasted Mergansers (max. 100 on 28th). Also seen were an out of season Gannet (14th) and small numbers of Common Scoters, Razorbills and Guillemots. At least 18 Little Egrets fed along the shore and a Water Rail was logged (23rd-26th). A total of 1400 Pink-footed Geese moved through and grounded birds included 63 Barnacle Geese and 167 pale-bellied Brent Geese while an influx of Shelduck was apparent at the end of the month (max. 465 on 26th). Additional wildfowl included nine Shoveler and four Scaup while 20 Purple Sandpipers, seven Greenshank and a Black-tailed Godwit were the pick of the waders. A Short-eared Owl was seen (10th) and additional birds of prey included Barn Owl, Little Owl, Merlin and Peregrine. The long-staying Hooded Crow remained in residence and 73 Twite and 36 Rock Pipits were the passerine highlights. 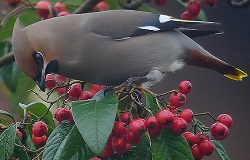 Waxwings generally became scarcer and less widespread with reports largely restricted to Penrith (max. 86) and Kendal (max. 45) plus 20 at Bowston Bridge and singles in Thurstonfield and Anthorn.

Other sites: Away from the Solway, Barnacle Geese included 63 near Flookburgh, four of them Svalbard-ringed birds. An exceptional 122 Red-throated Divers were counted off Drigg Point. Two drake Smew visited Talkin Tarn (1st) with at least one continuing to commute between there and Tindale Tarn (to 12th) while a drake remained on Derwent Water (to 15th) and a redhead appeared on Bassenthwaite Lake (15th). Little Egrets included six in the Lyth Valley and one on the Esk Estuary near Ravenglass. A Jack Snipe was at Watchtree N.R. A Lesser Whitethroat, perhaps of the Siberian race, frequented a Kirkbride garden. The Hooded Crow remained near Burneside, Brambling included 50 at Thacka Beck N.R. and 20 in a garden at Hallbankgate and Snow Buntings comprised four on Helton Fell near Penrith and two on Brown Fell, Geltsdale.