Highlights: A drake American Wigeon at Haverigg (22nd-25th) was the first in the county since 2006 while a drake Green-winged Teal was found at Ravenstown near Flookburgh (20th), a new site for the species. The adult Black Brant continued to associate with dark-bellied Brent Geese at Roa Island and occasionally straying to nearby Walney Island. An unseasonable first-winter Sabine’s Gull was reported from Bowness-on-Solway (13th).

Esk/Irt/Mite complex: Three Little Egrets frequented the Esk Estuary, four Greenshank remained on the Mite Estuary and a Hooded Crow was nearby at Tarn Bay, Bootle.

Furness: Two Glaucous Gulls were reported from Cavendish Dock (3rd) as was a Great Northern Diver at nearby Roosecote (3rd) and Roa Island (28th). The Foulney/Rampside Brent Goose flock numbered 58 each of dark and light-bellied, with 4400 Eider also counted. A Water Pipit continued to be seen occasionally at Rampside.

Hodbarrow: Two Slavonian Grebes reappeared on the lagoon (13th) with one still present (to 25th). Wildfowl included seven Gadwall, six Shoveler and seven Scaup. Pick of the waders was a Black-tailed Godwit and a Little Gull was blown in (13th). 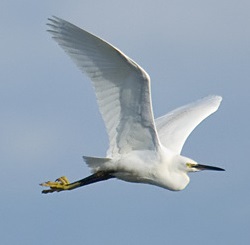 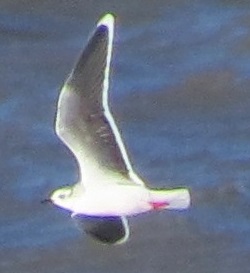 Outer Solway: The Red-necked Grebe off Nethertown was joined by a second bird (20th) with a Black-throated Diver (16th-19th) and three Long-tailed Ducks (19th) also seen. A juvenile Glaucous Gull was found at Maryport (16th) while an adult Yellow-legged Gull at Whitehaven harbour (8th) was presumably a returning bird, two Mediterranean Gulls were in the area including ‘Stumpy’ the regular adult at Workington and a first-winter Little Gull was at Parton (23rd-27th) where 34 Red-throated Divers were also noted (28th). Soddy Gap hosted 161 Goosanders. The Hooded Crow, or hybrid, reappeared at Whitehaven.

Walney Bird Observatory. Offshore highlights involved 11 Shags, a Great Northern Diver (7th-26th) and a total of 18 Little Gulls (2nd-9th). Also seen were Common Scoters (max. 42 on 8th) and small numbers of Red-throated Divers. The winter storms produced a seabird wreck with Razorbills and Guillemots most affected along with smaller numbers of Kittiwakes and Fulmars. A total of 46 Whooper Swans flew north and the Brent Goose flock held up to 163 pale-bellied and 60 dark-bellied birds. The Long-tailed Duck and several Scaup lingered throughout. Up to 25 Little Egrets continued to roam along the eastern shore and at least six Greenshank continued in residence. A flock of seven Snow Buntings was the pick of the passerine sightings along with a Yellowhammer amongst 45 Reed Buntings and 40 Twite. 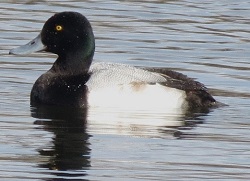 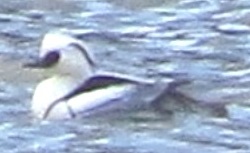 Other sites: Three Shags were found inland on Coniston Water (21st). Whooper Swans included 65 at Walby while up to 68 Barnacle Geese remained in the Flookburgh area. Two Smew, a male and a female, remained on Derwent Water along with two Scaup. Little Egrets included 11 in the Lyth Valley. The presumed Siberian Chiffchaff lingered around the water treatment works at Dalston. Up to five Hawfinches continued to frequent the Sizergh Castle car park.