Highlights: A Great Grey Shrike was found at Torver Back Common (16th).

Duddon Estuary: The saltmarshes hosted a Eurasian White-fronted Goose (3rd-5th) and 11 Barnacle Geese among at least 800 Pink-footed Geese along with two Little Egrets with a Red Kite and a Green Sandpiper also in the area. Wildfowl at Hodbarrow included 16 Gadwall and three Scaup while pick of the waders were seven Black-tailed Godwits.

Esk/Irt/Mite complex: The Esk hosted two Little Egrets, two wintering Common Sandpipers, a Green Sandpiper and a Greenshank while three Greenshank remained on the Mite. Five Whooper Swans and a Short-eared Owl were see near the Newbiggin viaduct.

Furness: A Water Pipit continued to be seen intermittently at Roa Island. Cavendish Dock continued to host a Greenshank. 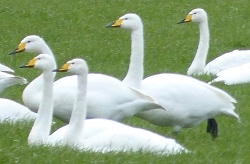 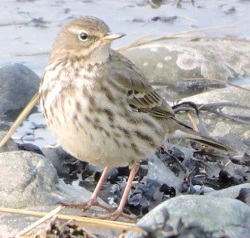 Kent Estary: Little Egrets decreased, with just eight present. Two Marsh Harriers, a ringtail Hen Harrier, several Peregrines and at least one Merlin continued to be seen. The Water Rail still appeared regularly at Foulshaw Moss while up to three were flushed from the saltmarsh at Grange-over-Sands with 80 Twite also in the area.

Outer Solway: A Black-throated Diver was off Nethertown (3rd). A female Scaup was at Soddy Gap with a Little Egret at Siddick Pond. Mediterranean Gulls were limited to two adults at Workington and a first-winter at Soddy Gap.

Walney Bird Observatory: Though three Shags remained in residence, it was a very quiet month over the sea with little evidence of movement other than small numbers of Red-throated Divers, Common Scoters, Razorbills and Guillemots. Wildfowl were, however, to the fore with 206 pale-bellied and 20 dark-bellied Brent Geese, 145 Pink-footed Geese, 85 Pintail, 53 Barnacle Geese, nine Shoveler, two Scaup and two Long-tailed Ducks. Waders included 3000 Knot, 1000 Golden Plover, six Greenshank, four Jack Snipe, two Black-tailed Godwits and a Purple Sandpiper. At least 23 Little Egrets remained and single Little Owl and Short-eared Owl were logged while there were regular Peregrine sightings. A hint of spring was provided by a steady increase in the numbers of Lesser Black-backed Gulls on territory, an early Siskin passage which produced 23 birds and a solitary Long-tailed Tit called in. The long-staying Hooded Crow put in several appearances and up to 100 Twite were logged.

Other sites: A Eurasian White-fronted Goose associated with Pink-footed Geese near Linstock (1st). The first Smew of the winter appeared, a redhead on the River Eden near Linstock (2nd-3rd) followed by a drake on Derwent Water (6th). Inland Scaup included two on Bassenthwaite Lake and one near Linstock while a Great Northern Diver on Windermere (10th) was a more unusual inland record. Little Egrets included 16 in the Lyth Valley where two Jack Snipe were on Brigsteer Wetland and an adult Mediterranean Gull was in nearby fields (27th). Up to five Short-eared Owls frequented Binsey. The male Black Redstart remained at Carlisle airport (to 25th), with a Short-eared Owl also seen there. Hawfinches included six at Witherslack and four at Sizergh Castle.