Esk/Irt/Mite complex: The Esk hosted a single Little Egret while three Greenshank remained on the Mite.

Furness: A Water Pipit continued to be seen intermittently at Roa Island along with a single Twite while a Jack Snipe was at Rampside, three Purple Sandpipers were on Foulney Island and a second-winter Glaucous Gull appeared briefly at nearby Roosebeck outfall (6th). A Shag was on Ramsden Dock with a Greenshank on nearby Cavendish Dock. 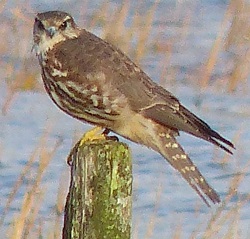 Hodbarrow: Wildfowl included 12 Gadwall and two Scaup while pick of the waders was a Black-tailed Godwit. Nearby, the Duddon Estuary area hosted a Red Kite, a Merlin, a Spotted Redshank (26th) and a Green Sandpiper. 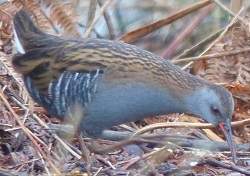 Kent Estuary: Up to nine Whooper Swans were seen and at least 10 Little Egrets were present. A Marsh Harrier lingered along with a ringtail Hen Harrier, several Peregrines and at least one Merlin. The juvenile Glaucous Gull appeared at Sandside (to 5th). A Water Rail was seen regularly at Foulshaw Moss and at least 50 Twite were in the Grange-over-Sands area.

Outer Solway: Single Red-necked Grebes were observed off Nethertown (3rd) and Allonby (20th), a Pomarine Skua was off Harrington (18th) and Parton (21st) where a Great Northern Diver (6th), a Little Auk (6th), a Shag and a Great Skua (27th) were also reported. A female Long-tailed Duck appeared off Lowca (19th). At least one Bittern was at Siddick Pond while 30 Red-throated Divers, 37 Purple Sandpipers and two adult Mediterranean Gulls were at Workington. Two Short-eared Owls hunted Mawbray dunes.

Walney Bird Observatory: Seawatching highlights included a juvenile Pomarine Skua (19th) and up to 22 Shags. Pick of the wildfowl were the two long-staying Long-tailed Ducks, two Scaup and 45 Barnacle Geese while waders included five Purple Sandpipers, two Greenshank, a Black-tailed Godwit and a Jack Snipe. At least 40 Little Egrets continued to roam the island. A Snow Bunting flew over (18th) and the Twite flock increased to 220.

Other sites: An unseasonable juvenile Pomarine Skua appeared at East Plain, Flookburgh (3rd) with up to 42 Barnacle Geese and 14 Black-tailed Godwits at nearby Ravenstown. Little Egrets included 10 in the Lyth Valley. Whooper Swans included 66 at Walby. Up to four Short-eared Owls frequented Binsey and a Jack Snipe was at Cliburn Moss. The male Black Redstart remained at Carlisle airport, with a Jack Snipe also seen there, and a Hooded Crow was near Burneside. By far the highest count of Bramblings came from the far northeast of the county with 136 at Talkin Tarn and 100 at Hallbankgate while Snow Buntings comprised 15 on the Howgill Fells, 11 on Bleaberry Fell, 10 on Dollywagon Pike, four on High Street and one on High Seat. Four Hawfinches were seen at Witherslack.