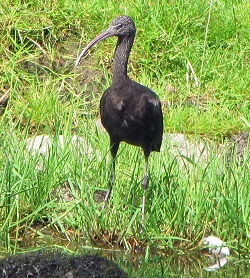 Bassenthwaite Lake: The Ospreys lost one of their chicks to illness and one of the surviving two appears to be developing slowly.

Esk/Irt/Mite complex: A Quail was heard alongside the Irt Estuary. The long-staying Hooded Crow was seen again at Eskmeals.

Kent Estuary: The Foulshaw Moss Ospreys hatched three young. There were several sightings of wandering Marsh Harriers and at least 21 Little Egrets were present. A female Garganey was found at Ulpha Meadows (30th) while waders included nine Avocets at Arnside Marsh (18th), the largest flock ever seen in Cumbria, and an impressive 94 Black-tailed Godwits near Arnside.

Outer Solway: A Quail was heard between Maryport and Dearham.

Other sites: The River Esk at Longtown still hosted up to seven first-summer Little Gulls early in the month and a Quail was heard nearby. A Hobby was seen at Ralfland Forest near Shap (19th) and a female Mandarin was on Whinfell Tarn.