Hodbarrow: One Slavonian Grebe remained in residence (to 9th). Wildfowl included six Gadwall and eight Scaup. Pick of the waders was a Black-tailed Godwit 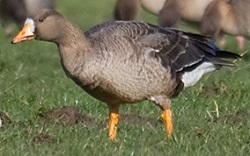 Inner Solway: At least five Little Egrets still roamed the area. Whooper Swan numbers generally declined but still included 74 near Wedholme Flow while numbers of Pink-footed Geese remained high, accompanied by four White-fronted Geese with adult and first-winter birds of both Greenland and European races in the Whitrigg area. Other wildfowl included four Gadwall at Campfield Marsh. Up to 16 Red-throated Divers were seen off Bowness-on-Solway along with Kittiwakes (max. 210) while an early Arctic Skua appeared off Silloth along with the first returning Osprey (23rd).

Kent Estuary: At least seven Little Egrets were present. A passage flock of 50 Whooper Swans dropped in while 37 Eiders were also seen and waders included 64 Snipe and three Jack Snipe at Kents Bank and a Green Sandpiper near Sampool.

Outer Solway: A Shag was at Parton (5th) and at least one Bittern remained at Siddick Pond (to 7th). Single Jack Snipe were found at Lowca and Weddicar and 25 Purple Sandpipers remained at Workington. A juvenile Glaucous Gull was seen flying south near Maryport (21st) while Mediterranean Gulls comprised four, two first-winters, a second-winter and an adult, at Flimby three adults, including ‘Stumpy’, at Workington and an adult at Parton.

Walney Bird Observatory. Sea passage was steady rather than spectacular throughout the month with small numbers of Red-throated Divers (max. 10 on 2nd), Razorbills (max. 50 on 29th), Guillemots, Gannets (from 5th), Fulmars (from 18th) and Sandwich Terns (from 21st) logged. Common Scoters were more prominent (max. 233 on 5th) while highlights involved up to four Shags, a Velvet Scoter (4th), three Little Gulls (19th), two Goosanders (30th) and a Blue Fulmar (21st). At least 12 Little Egrets were present at the start of the month but numbers dwindled thereafter while several Water Rails were recorded. An Osprey moved north (31st) while both Peregrine and Merlin were regularly recorded and a Short-eared Owl was seen (3rd). A total of 135 Whooper Swans and 160 Pink-footed Geese flew through while the Brent Goose flock held 153 pale-bellied birds. The long-staying Long-tailed Duck remained all month but the final Scaup departed (13th). Wader numbers were generally low, excepting for 8000 Knot (3rd), although 10 Purple Sandpipers, 10 Greenshank and three Black-tailed Godwits were seen. Diurnal migration steadily increased through the month and was dominated by Meadow Pipits (1495 on 30th, 1505 on 31st) and Pied Wagtails (max. 29 on 30th) but also included small numbers of Grey Wagtails, Siskins and Lesser Redpolls along with Stock Dove (8th), two Sand Martins (29th) and a Great Spotted Woodpecker (30th). A Hooded Crow was seen (11th & 29th). The first Goldcrest moved through (8th) and was followed by both Chiffchaff and Wheatear (from 13th) with a steady passage of the latter (max. 49 on 30th). A flock of 50 Twite, although erratic in their appearance, remained throughout the month.

Other sites: Passage Whooper Swans included 20+ on Windermere (30th). The two Smew, a male and a female, remained on Derwent Water (to 4th) while the drake Scaup lingered on Longlands Lake and a first-winter drake Common Scoter was on Talkin Tarn (17th). Ospreys passed over Windermere (29th & 30th) and Longtown (30th). A Bittern was seen at Farleton View Fishery near Milnthorpe (28th). Little Egrets included eight in the Lyth Valley and two on the Esk Estuary near Ravenglass. A Black Redstart frequented a garden at Holme (8th). The presumed Siberian Chiffchaff lingered around the water treatment works at Dalston. Up to six Hawfinches continued to frequent the Sizergh Castle car park while impressive numbers of Snow Buntings were found on some fell tops with 35 on Fairfield and 20 on High Street.