Highlights: The Great White Egret continued to show intermittently at Kents Bank (to 23rd) and a drake Green-winged Teal was found at Sandscale Haws (5th) before relocating to Hodbarrow (27th). Great Grey Shrikes appeared at Tarn Hows (9th) and near Spadeadam (13th).

Furness: Red Kites seen at Aldingham, Baycliff and Gawthwaite were presumably from the recently re-introduced population. A late Curlew Sandpiper was at Rampside (22nd) and an adult Mediterranean Gull visited Roosecote and Cavendish Dock. A ringed Water Pipit was at Rampside (26th-30th).

Hodbarrow: A Great Northern Diver took up residence on the lagoon (13th-14th). Pick of the 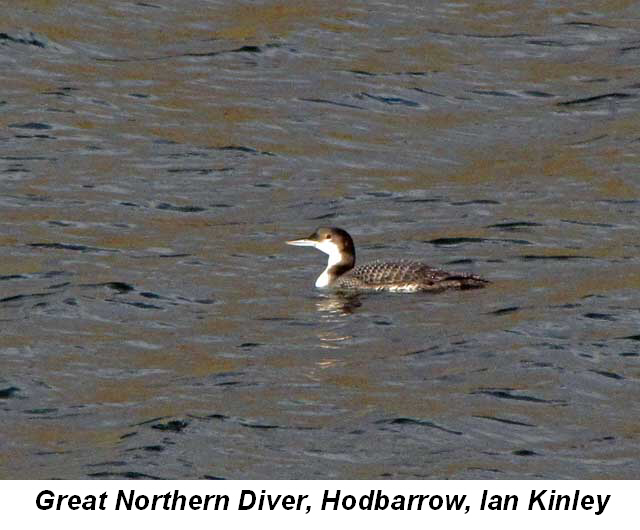 wildfowl was a Scaup (13th) while waders included a Black-tailed Godwit.

Inner Solway: A Great Northern Diver was seen off Burgh Marsh (7th) and a Slavonian Grebe visited Carr Beds (14th). At least two Little Egrets roamed the area. Whooper Swans included 400 at Kirkbride whilst the adult Ross’s Goose continued to associate with large numbers of Barnacle Geese on Rockcliffe Marsh, nine pale-bellied Brent Geese were at Grune Point (3rd) and two redhead Smew were seen at Kirkandrews-on-Eden (7th). At least three Hen Harriers hunted the area along with Merlin and Peregrine. Pick of the waders were an especially late Dotterel near Metal Bridge (8th-10th), a Spotted Redshank at Bowness Railings (21st), three 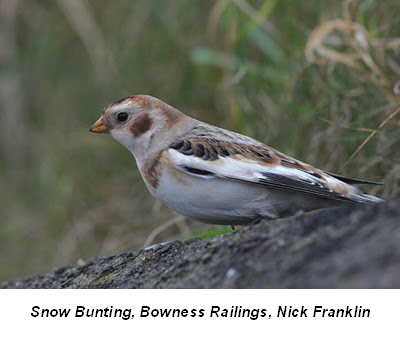 Black-tailed Godwits at Grune, two Jack Snipe and a Green Sandpiper near Rockcliffe. A Short-eared Owl was seen at Blitterlees. A Chiffchaff, probably abietinus, frequented the edge of Glasson Moss. Twite included 500 on Newton Marsh while two Snow Buntings were seen at Bowness Railings (21st-22nd).

Outer Solway: A Great-Northern Diver was seen off Sellafield (2nd) where a Short-eared Owl was observed flying north over the sea about 200m offshore (7th). A Shag and 14 Purple Sandpipers were at Workington. Adult Mediterranean Gulls were at Parton, Workington and Flimby, a Hooded Crow was at Whitehaven Harbour (16th) and a Snow Bunting was found at Mawbray (13th).

Walney Bird Observatory: Highlights over the sea involved a late Leach’s Petrel and two Little Gulls (4th), a Slavonian Grebe (4th, 27th & 28th), Little Gull (13th), Great Skua (7th, 11th, 12th), Arctic Skua (2nd & 13th) and up to 14 Shags. Also seen were 105 Kittiwakes (13th) and several late Gannets amongst small numbers of Red-throated Divers, Common Scoters, Razorbills and Guillemots. A record breaking 60 Little Egrets were scattered across the east shore of the island (3rd) and a further 41 Whooper Swans and 773 Pink-footed Geese headed south. Other wildfowl included 102 pale-bellied and a single dark-bellied Brent Goose, 28 Barnacle Geese – including three darvic ringed individuals – and a Long-tailed Duck. Wader sightings were led by a lingering Grey Phalarope (13th-19th) along with 16 Purple Sandpipers (22nd), up to 16 Greenshank and three Black-tailed Godwits and a migrant Woodcock (9th). At least three Water Rails were on the island while raptors included a ringtail Hen Harrier (20th), Long-eared Owl (27th), two Short-eared Owls (9th-10th), up to three Merlin and regular sightings of Peregrine and Barn Owl. Passerine highlights involved the return of four Water Pipits amongst at least 12 Rock Pipits (from 4th), a Black Redstart (19th), two Snow Buntings (7th) and further singles (20th and 22nd).Totals of 60 Tree Sparrows, 26 Siskin and 11 Brambling brought to a close the strong autumn finch passage while up to 100 Goldfinches and 140 Twite were in residence and late migrants involved Blackcap (21st), Chiffchaff (24th) and the island’s latest ever Willow Warbler (23rd). Three Ravens toured the island throughout the month. 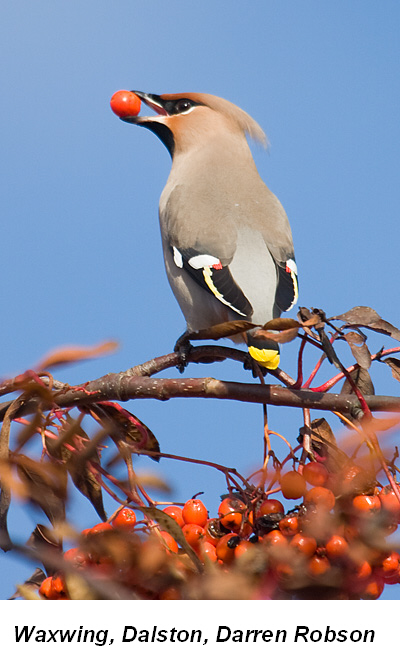 became more widespread, some reaching the far west of the county though few penetrated the Furness peninsula. Sadly, at least a dozen were found dead, having flown into windows. Peak counts comprised 500 in Dalston, 400 in Wetheral, 350 in Kendal, 349 in Penrith, 250 in Carlisle, 100 in Allithwaite, 90 in Keswick, 85 in Brough, 70 in Milnthorpe, 60 in Arnside, 60 in Ulverston, 55 in Levens (one of which had been ringed in Aberdeen a week earlier), 50 in Cockermouth, 50 at Tindale Tarn, 40 in Beckermet, 35 in Burneside, 30 in Corby Hill, 25 at Grasmere, 25 in Windermere, 25 in Shap, 22 in Hallbankgate, 21 in Morland, 20 in Appleby, 20 near Cleator Moor, 20 in Lamplugh, 20 in Brampton, 20 in Grange-over-Sands, 15 in Kirkbride, 13 in Kirkby Lonsdale, 10 in Rockcliffe, 10 in Egremont, nine near Killington Reservoir, eight in Storth, seven at Sizergh Castle, four in Workington, four in Baycliff, three in Reathwaite, two in Millom and singles at Sedgewick and Wigton. Doubtless, some duplication is involved in the above but, on the other hand, many will also have gone unreported. 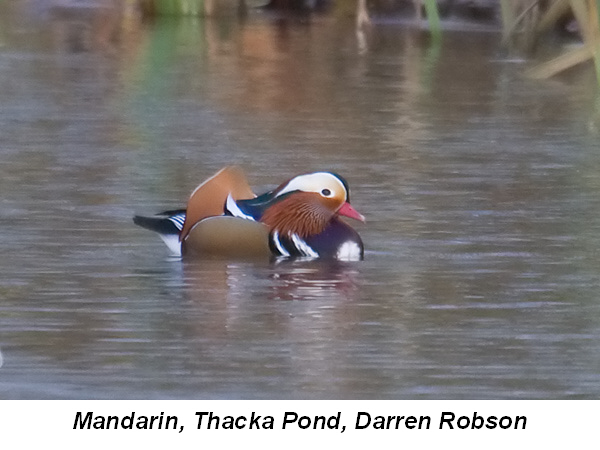 Other Sites: A Slavonian Grebe visited Tindale Tarn (8th-26th). Two European White-fronted Geese were with Pink-footed Geese near Brampton (1st), two drake Mandarins were on Thacka Pond, Penrith with a pair also at Kirkby Lonsdale and the Long-tailed Duck remained on the River Esk at 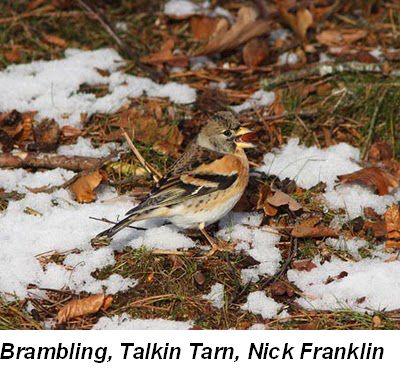 Longtown (to 11th). A late Swallow was seen at Burton-in-Kendal (4th). Bramblings were widespread but generally in fairly small numbers apart from a massive 2000 at the traditionally favoured Talkin Tarn. Four Hawfinches were seen in Grizedale Forest while Crossbills included at least 140 at Paddaburn, 49 in one tetrad at Spadeadam and 29 at Whinlatter. A Snow Bunting was on Little Stand, above Cockley Beck (13th).