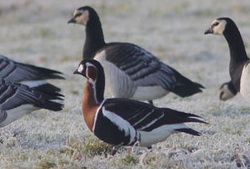 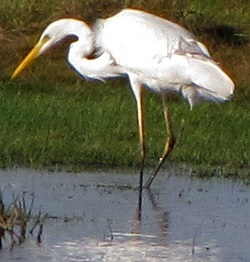 Highlights: An adult Red-breasted Goose accompanied Barnacle Geese at Whitrigg (16th-18th) then Cardurnock (28th-30th) while at the opposite end of the county, a drake Green-winged Teal lingered at Hodbarrow (1st-28th), both were returning birds. The adult American Golden Plover lingered elusively at Anthorn (to 16th) and was joined by a juvenile (5th), remarkably, the fourth of the species to be found on the Solway this autumn. Meanwhile, the long-staying Great White Egret remained in residence at Campfield Marsh all month and the individual returned to Kents Bank for its fourth successive winter (17th-18th).

Eskmeals area: An adult Yellow-legged Gull was again on the Esk Estuary (4th) along with a Spotted Redshank and a Greenshank while nearby fields continued to attract exceptional numbers of Whooper Swans (max. 220) along with two adult Mediterranean Gulls (28th). The Hooded Crow remained in the area.

Furness: Foulney/Rampside hosted 65 Brent Geese, 12 Scaup, five Little Egrets and a Short-eared Owl. At least four Mediterranean Gulls, three adults and a second-winter, were in the vicinity of Roosbeck/Newbiggin and a Green Sandpiper was at Stank.

Hodbarrow: The Slavonian Grebe lingered (to 28th) and was joined on the lagoon by a Red-throated Diver (28th) while up to 12 Little Egrets roosted.

Inner Solway: Whooper Swans included an exceptional 690 at Blackdyke near Silloth and 4000 Pink-footed Geese were also to be found in the area and other wildfowl included a dark-bellied Brent Goose at Cardurnock (29th) and 4500 Teal at Wedholme Flow. At least three Little Egrets roamed the area while raptors included Hen Harrier, Merlin and Peregrine. Wader highlights consisted of two Ruff at Anthorn and six Black-tailed Godwits at Bowness-on-Solway. Three Short-eared Owls hunted Skinburnes Marsh with a single also at Campfield and 250 Twite roamed Border Marsh.

Kent Estuary: At least 10 Little Egrets were present. Some 50 Tree Sparrows were on Heversham Moss and 22 Twite were at Holme Island though pick of the passerines were a Black Redstart at Grange over Sands (30th) and a Snow Bunting near Halforth (29th). 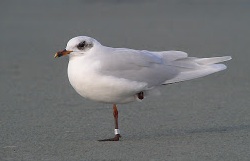 Outer Solway: A Bittern was seen occasionally at Siddick Pond. Mediterranean Gulls comprised two adults at Workington and an adult at Soddy Gap where 114 Goosander were also present.

Walney Bird Observatory. Offshore highlights involved single Great Northern Diver (3rd) and Black Guillemot, Slavonian Grebe and Black-throated Diver (all 17th) along with up to 10 Shags. Also seen were good numbers of Red-throated Divers (max. 47 on 29th), Common Scoters (max. 215 on 28th) and Razorbills (max. 370 on 7th) and small numbers of Gannets, Fulmars and Kittiwakes. A total of 48 Whooper Swans and 605 Pink-footed Geese flew through and the Brent Goose flock increased steadily to a record 170 pale-bellied birds. Other wildfowl included four Goosanders, four Gadwall, 47 Pintail and 11 Shoveler. Waders were led by 17 Purple Sandpipers, 15 Greenshank and single Jack Snipe (13th & 17th) and several Woodcock were amongst large numbers of Snipe. At least 30 Little Egrets still roamed the island mid-month and at least six Water Rails were present. The last few Tree Sparrows, Lesser Redpolls and Siskins moved through accompanied by a total of 25 Bramblings. The Twite flock increased (max. 180 on 17th) and a Snow Bunting was logged (3rd) while the long-staying Hooded Crow and up to three Jays remained throughout. Fieldfare and Redwing were surprisingly thin on the ground while tardy summer migrants included Blackcap (13th), Garden Warbler (15th), Chiffchaff (17th) and Swallow (17th). One of the features of late autumn was the movement of above average numbers of Woodpigeons over the island (max. 490 on 11th). 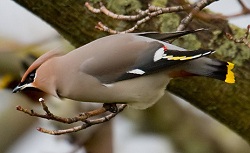 Waxwings increased dramatically with peak counts of 135 in Penrith; 130 in Carlisle; 80 in Barrow-in-Furness; 65 in Wetheral; 50 in Dalston; 45 in Lazonby; 40 in Keswick; 40 on Arnside Knott; 30 in Workington; 22 near Raughton Head; 22 at Thurstonfield; 20 in Brampton; 20 in Ulverston; 20 on Walney; 20 in Asby; 18 in Great Broughton; 17 in Milnthorpe; 15 in Kendal; 15 in Holme; 15 in Milburn; 10 in Cleator Moor; eight in Ambleside; eight at Humphrey Head; seven at Waberthwaite; six at Distington; six in Kirkbride, six in Stainton near Penrith; six in Allithwaite; five at Hodbarrow: four in Oulton; four in Egremont; three in Dearham; three in Bowness-on-Solway; three at Rowrah; two at Low Row; two in Beetham and singles over Whitbarrow and at Sizergh Castle, Soddy Gap and Anthorn.