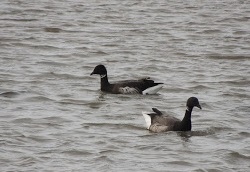 Highlights: An adult Black Brant associating with dark-belied Brent Geese at Roa Island (26th) and then Snab Point, Walney (30th) was surely the ‘first-winter or hybrid’ seen in the area earlier in the year. A drake Green-winged Teal returned to Hodbarrow for another winter (5th-15th) then it or another appeared on the Esk Estuary south of Ravenglass (14th). The Great White Egret remained on Rockcliffe Marsh (to 2nd) before relocating to Bowness-on-Solway (28th). A Great Grey Shrike was found in the far northeast of the county at Waterhead Common (4th)

Furness: Three Little Egrets were at Bardsea. A Jack Snipe and 76 pale-bellied Brent Geese were seen at Foulney Island while 3870 Eiders were counted between there and Aldingham. Cavendish Dock hosted a Shag with two Greenshank on nearby Roosecote Sands. 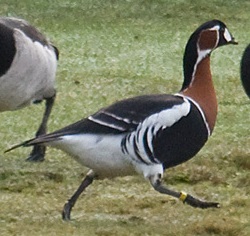 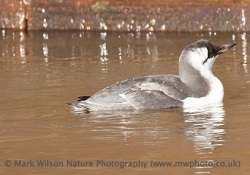 Inner Solway: At least five Little Egrets lingered. Whooper Swan numbers increased dramatically (max. 520 near Abbeytown). A Red-breasted Goose consorting with Barnacle Geese in the Cardurnock/Anthorn area (5th-17th) bore a yellow ring and was presumed an escaped bird while a Todd’s Canada Goose was also found amongst Barnacle Geese on Rockcliffe Marsh (10th) and single Greenland White-fronted Geese were seen at Rockcliffe (1st) and near Kirkbride (5th). A Long-tailed Duck was on the Eden at Old Sandsfield (2nd). Other wildfowl included 2200 Pink-footed Geese and 1700 Teal at Wedholme Flow while pick of the waders were six Ruff at Blackdyke near Silloth and two Jack Snipe at Red Hall Farm. Guillemot sightings included one in Silloth harbour. Two Snow Buntings frequented Grune Point (30th). 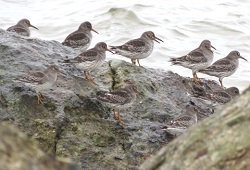 Outer Solway: A Bittern was seen occasionally at Siddick Pond. Two different Black-throated Divers, an adult and a juvenile, were observed off Nethertown (2nd-6th) as was a Great Northern Diver (24th-28th) and a Slavonian Grebe (11th). The Workington Purple Sandpiper flock held at least 45 birds with two adult Mediterranean Gulls also present. A flock of 20 Twite frequented fields near Siddick.

Walney Bird Observatory. There were relatively slim pickings over the sea with the highlights involving up to 14 Shags, a Long-tailed Duck (3rd), two Great Northern Divers (5th-7th), a Black-throated Diver (7th), a Velvet Scoter (5th-7th) and seven Scaup (7th) amongst small numbers of Red-throated Divers (max. 15 on 30th), Gannets (to 8th), Common Scoters (max. 130 on 5th), Kittiwakes, Guillemots and Razorbills. Good numbers of Little Egrets were still present (max. 43 on 2nd), at least three Water Rails were seen while a Mediterranean Gull was logged (4th). A total of 860 Pink-footed Geese and 28 Whooper Swans flew through while the Brent Goose flock steadily increased until 150 pale-bellied and 60 dark-bellied birds were present at the month’s end. Wader numbers steadily built and amongst the usual species were Purple Sandpiper, Jack Snipe (2nd), Black-tailed Godwit (11 on 5th), Greenshank (15 on 5th) and a Ruff (20th). The last few migrants trickled through including Blackcap (to 11th) and Chiffchaff (to 18th) while 20 Tree Sparrows, seven Bramblings, five Siskins and three Lesser Redpolls were recorded along with a flock of 50 Twite. However, a Yellowhammer was the rarest of the lot – a testament to the decline of this species in the area in recent years.

Other sites: Whooper Swans included 41 at Longtown while 111 Barnacle Geese, including several darvic-ringed birds, lingered on Sand Gate Marsh near Flookburgh and a female Common Scoter was on Killington Reservoir (3rd). A Hooded Crow was at Cockermouth, up to eight Hawfinches frequented the Sizergh Castle car park and Snow Buntings comprised four on Black Combe Crags, two on High Street and one on Great Calva.