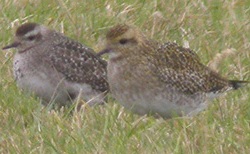 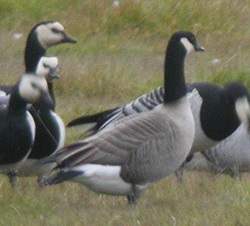 Highlights: Two vagrant Canada Geese, both potential county firsts, were found associating with Barnacle Geese on the Inner Solway as a Richardson’s Canada Goose at Whitrigg (25th-26th) was, amazingly, followed by a Todd’s Canada Goose at nearby Cardurnock (27th). An adult American Golden Plover at Cardurnock (26th) was considered to be one of the birds seen at Drumburgh in September, while an adult at nearby Longcroft (27th) then Cardurnock (28th) was, remarkably, a new bird, the third of the autumn. At the opposite end of the county, Cumbria’s second Cetti’s Warbler was found at North Scale, Walney Island (28th-29th). Meanwhile, last year’s long-staying Great White Egret returned to Campfield Marsh (from 10th). 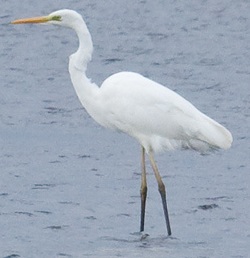 Eskmeals area: An adult Yellow-legged Gull was again on the Esk Estuary (6th-21st) along with two Ruff (28th) and a Little Egret while a nearby flooded barley field attracted an exceptional 289 Whooper Swans and 600 Greylags. The lingering Hooded Crow also remained in the area.

Furness: Rampside hosted 178 Brent Geese (including at least 23 dark-bellied birds) while six Scaup were off Foulney Island and 5412 Eider were counted. At least six Mediterranean Gulls, five adults and a second-winter, were in the area. 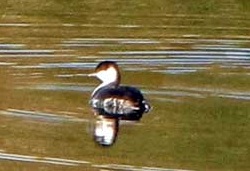 Hodbarrow: A Slavonian Grebe lingered (2nd-21st), wildfowl included four Scaup, five Little Egrets were seen and pick of the waders was a Spotted Redshank (10th). Nearby, 120 Common Scoters were off Silecroft and four Little Egrets were on Millom Marsh.

Inner Solway: Whooper Swans included 268 at Blackdyke, Abbeytown. Unusually high numbers of Pink-footed Geese for the time of year were to be found feeding on unharvested barley with 5350 counted while Barnacle Geese included 9000 on Rockcliffe Marsh and other wildfowl included two dark-bellied Brent Geese on Border Marsh (14th), 4600 Teal at Wedholme Flow, 165 Shoveler at Campfield and two Long-tailed Ducks at Carr Beds. Six Little Egrets roamed the area while raptors included a late female Marsh Harrier at Campfield (30th) along with Hen Harrier, Merlin and Peregrine. Wader highlights consisted of single Curlew Sandpipers at Anthorn (14th) and Port Carlisle (25th), two Spotted Redshanks, a Little Stint (25th-26th) and a late Common Sandpiper (to 25th) at Port Carlisle, 75 Snipe at Wedholme Flow and nine Ruff at Longcroft plus a few Black-tailed Godwits. An adult Mediterranean Gull was on the airfield at Kirkbride (24th) with perhaps the same bird at nearby Anthorn (29th) while, much more unusually, a Little Auk passed Bowness-on-Solway (31st). Up to 30 Twite were to be found at Anthorn.

Kent Estuary: Up to nine Whooper Swans were seen and other wildfowl included 102 Eider. At least 17 Little Egrets and a ringtail Hen Harrier were present. Pick of the waders were a Little Stint (14th) at Arnside and up to eight Black-tailed Godwits while passerines included at least 30 Tree Sparrows on Heversham Moss.

Outer Solway: A remarkable 645 Red-throated Divers were counted drifting out of Allonby Bay on the ebbing tide (15th). Mediterranean Gulls were prominent with four, ‘Stumpy’, the regular adult plus another three adults, at Workington, three birds at Parton and an adult at Maryport. At least one Short-eared Owl was at Beckfoot and 14 Twite were at Mawbray. 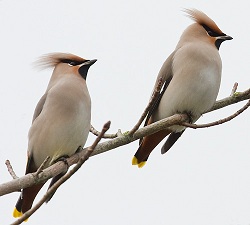 Other sites: Seven Common Scoters appeared inland on Windermere (26th) and two Scaup were on Bassenthwaite Lake. Little Egrets included 17 on the Flookburgh Marshes and two in the Lyth Valley. A few Ring Ouzels arrived with the winter thrushes; three at Geltsdale (23rd) and singles at Wet Sleddale (24th) and Buttermere (26th). The first of the winter’s Waxwings appeared (from 29th) with up to 11 in Carlisle and three at Haweswater. Two Hawfinches were seen at Elter Water.